These backyard games are great fun to be played on the lawn, beach, and other soft surfaces. Where all of them can be purchased, you can also make some of them as your own diy projects. The rules, scoring, videos of how to play, and images are provided to help you decide if this game is right for your family.

I think you will find that through the research, these are games that will provide endless entertainment with kids, teens, and adults. So read up on what are the best games to play with those people who are important enough to enjoy life activities with and then go out and have fun playing. 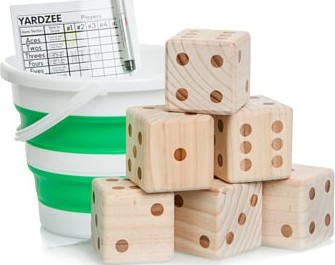 To play Yardzee it would be just like playing regular Yahtzee, when you roll you are trying to get one of the 13 categories. Those categories are; how many dice you can roll of one number(1’s,2’s,3’s…), straights, full house, 3 of a kind, 4 of a kind or YAHTZEE(5 of a kind). You keep score on the sheet and the person with the most points when the two sections are added up, WINS!

Yardkle is the yard version of Farkle. In the effort to be the first player to score 10,000 points or more, a player rolls all six dice at a time and gets points for certain combinations. A “Yardkle” occurs when a player has rolled the dice and did not get any points, so it becomes the next players turn to roll. If you roll and get at least one scoring die, you may either record those points and be done with your turn, or you can put those die aside and roll again to get another score. If you do not get a score on any of your rolls during that turn, you lose all the points from that round and pass the dice to the next player.

Scoring the dice in a single roll are:

This game involves throwing a disc and then aiming for it with the rubber chickens. The disc can be thrown as far as you want, and when it lands it will have one of two sides up. One side is a bonus side(-1) and the other is a penalty side(+1).

Everyone will flick or throw their chicken until it is on the disc. They should each keep track of how many throws it took to get their chicken on the disc, they do this for 9 rounds and then total up their score to see who won. After each round, the person with the lowest score gets to throw the disc.

3. Giant Bowling Set for the kiddos

Large 27” ten pins with ball included in set. Set up the pins and let your young kiddos practice bowling in the backyard.

The Beer Pong Golf boards are set up anywhere from 6’-15’ apart, and then put cups in the holes on the board. The game can be played one on one or with teams. If playing teams, each player gets a chance to make a shot by hitting the whiffle ball with a golf wedge aiming for the cups. If playing singles, each player gets two chances to make a shot. You will get the ball back if two consecutive shots are made. The ball may bounce on the way to the board.

The winner is decided by which team has the least cups left on the board after the designated time has passed, which is usually around 30 minutes, or when a team gets all the cups. If there would still be a tie after the time or cups are earned, three more cups will be put on the board and they will have five minutes to win. No cup is put in the very front hole.

This Beer Pong Golf set is portable to be put up in the backyard or take along tailgating at your favorite sporting event. (However, I don’t recommend you taking it to the little league game or to a kids game)

The cups and clubs are not included in the set, so you will either need to use ones that you have or purchase separately what you will need. Here is a video to watch about Beer Pong Golf.

Spikeball is one that I will make a whole post on so you get the complete details and rules. This backyard game is one to play on the beach, lawn or gymnasium. It soared in popularity after being seen on Shark Tank.

You serve the ball overhand like in volleyball, but you serve down at the hula hoop shaped net that is only about 8” off the ground. The opponent receives it and the team of two have three changes to hit the ball back to the net. Once the serve is put into play, there are no boundaries. If a team is not able to return the ball back to the net according to the rules, the other team gets a point. Play to 21 points. With experience, you get great action from this game.

The trend seems to be to take indoor games and enlarge them to play outside. This is another example of just that, with the outside game of Connect Four, it is played just like the small version but now you get to be outside playing.

Two or more players drop the round plastic coins in from the top of the board alternating turns trying to get 4 in a row. Join four of your color of coins in a row in any direction to win! The game is quickly reset by sliding out the wooden bar at the bottom to get all the plastic coins back out.

Steps to build your own connect four as seen on Home Depot’s Site.

This game can be played with 2-4 players. Players take turn alternating a chance to throw their rings at the game that is set between 10’-15’ away. Points are added up and those rings that bounce off do not count. The point values are 1, 5, 15, and 20 with the center ring being worth 25 points.

You can play short games by tallying up the score after each round and decide on a winner or pick a score to go to, such as 100, 200 or all the way up to 500 points.

This is a great game for kids to work on eye hand coordination, addition and sportsmanship. Easy to set up as seen in this video.

This is a large version of beer pong without the beer. A great game for any age and even though it is considered as the beach edition, it could be used on grass or any other surface as well.

The buckets are set up anywhere from 10-25 feet apart. Teams are made up of 2-4 players, and teammates stand on the same side of the court. Decide which person or team will go first by rock, paper, scissors or a toss off to see who gets a ball in the bucket first.

Each player on the teams throw one ball and if the ball goes into the bucket, the bucket is taken away. Only one time during the game is a team allowed to re-rack or reposition the remaining buckets. As soon as one team eliminates all their opponents buckets, they win the game!

The set is ideal for at the beach and packs up to be very compact to make transporting it easier, because it comes with a tote bag to carry it in.

This game is unlike others in that there is no net and really not any rules. This fun game is similar to a combination of badminton, ping pong and tennis. The LED lite birdies can be hit to play slow or fast, so it keeps you moving at the rate you want to move. You can stand any distance apart as long as you can keep it in motion, so it is appropriate for any age.

This is one that could be played indoors since the birdies are lightweight and won’t break anything. This video shows how it is used

Kids will love these light up rockets that turn into helicopters and fly as high as 120 feet into the night sky from the slingshot.

Be careful to not let them hit the hard ground, this will keep them working longer. You will also want to purchase extra rubber bands. Make sure young children are protected from the falling helicopter.

On a nice summer day…

Take your pick of one of these outside backyard games, gather up family and or friends and have fun making memories and stay active.

If there is another outside activity that you think should be on the list, be sure to leave me a comment.