KanJam is a game that is escalating in popularity. The game has moved from a few guys playing it in their yard to tournaments being held all over the country. If you haven’t been introduced to the game yet, keep reading so you can learn KanJam rules and where you can purchase a game for your chance to play.

To play the game of KanJam you will need two heavy-duty buckets or “kans” which stand 25” high and 18” in diameter, with an open top and a slot in the front, plus a KanJam disc. The two kans are spaced 50 feet apart, but if your backyard or playing space does not allow that you may alter the distance. Although a person may be able to make their own KanJam game with much effort, I feel it would be worth the cost to purchase a set instead. The most difficult part of making your own would be cutting the slot into the can or pail.

There are two teams of two- with partners on opposite sides. Teams take turns throwing and deflecting the disc at or ultimately into the can. Throwers must stand so that no part of their body passes the imaginary line marking the front of the Kan. Each team member takes a turn throwing and deflecting before the other team gets a turn.

To decide who goes first you will usually do a flip of the disc. The winner may choose to go last instead of first.

Play to 21 points and you may not go over 21 points. If you throw and go over 21, the points earned are subtracted. So if you had 19 and get a bucket for 3 points you have to subtract 3 and your score is 16. This short video demonstrates and explains the different options of scoring while playing KanJam. 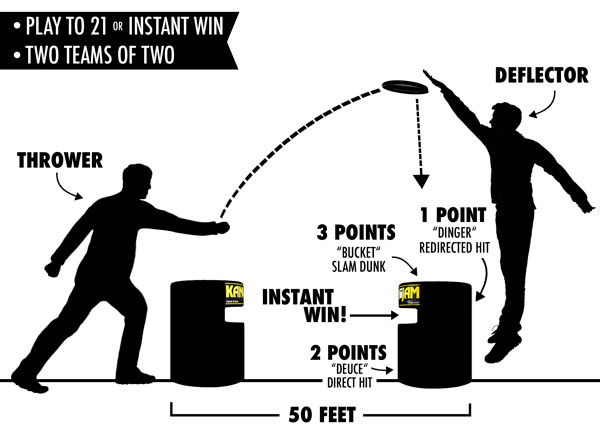 The majority of people who play the game, play in an open, grassy area outside. However, there are variations such as mini KanJam and one for in the pool as well. These latter options are not nearly as popular as the original KanJam and the one that I have explained in this post.

Unlike many other lawn games that people play, there really is not as many differences between KanJam games that can be bought. They are all the standard equipment without the variance of quality. This being said it is a matter of finding where you can purchase it for the best price, but research shows that the price is normally around $39.99.

There are a few variations such as one that is imaged Patriotic, one Glow in the Dark, and one that is played with a football instead of a disc.

This game is easy to store because the Kan flattens down to allow for easy storage. So get yourself a game set and start working on those skills. Maybe we will see you on the podium at one of the area tournaments.

In the Classroom or the Backyard:

The basic skill to throw a frisbee or disc needs to be practiced so students can keep the disc low, level and going straight. Have students practice throwing the frisbee or disc at a partner who is ready to catch it.

Finally, put the KanJam in place and practice the skills needed to play the game. Practicing these skills will limit any frustration that beginners may feel while learning to aim and to deflect their partners throw.

This would be a fun game for graduation parties, family reunions, Physical Education classes or just when friends are gathered to hang out.

I like KanJam because it provides the opportunity to take a skill of throwing a frisbee/disc and add a new element. Many people have thrown a frisbee before and this game adds a level of excitement to keep people interested over time. The challenge of being able to deflect the disc into the bucket is fun and how quick can the game change if one throw through the slot can win the game!