How to Play Spikeball: With Video

Have you heard of Spikeball? Do you play Spikeball? Spikeball was seen on Shark Tank a few years back and has been growing like crazy since then. The rules are similar to volleyball on a different kind of net. Many times when people first see the net, they think it is a trampoline, but I would highly recommend you don’t jump on it. It is typically played outdoors and can be set up on the lawn, beach, or any even ground.

Once assembled from the box, be sure that the net is an even tension across the frame and that the ball is inflated to a 12-inch circumference. Then set it up somewhere that allows you room to move.

There are two teams, each with two players. If there was a circle drawn around the net, one team would be spread out on half the court and the other two opponents on the other half. Once the ball is in play, the four players may move anywhere.

When new to the game, take a time period to practice serving and returning the ball without keeping score. Practice passing the ball one handed to a teammate and using the three hits before hitting back down to the net. Get used to how the ball bounces and using only one hand with your hits.

Players want to be ready to move and change direction quickly. Try to use the strategy to get your opponent out of position and vary up how many hits you used to spike it down on the net, as well as how hard you hit it off the net. 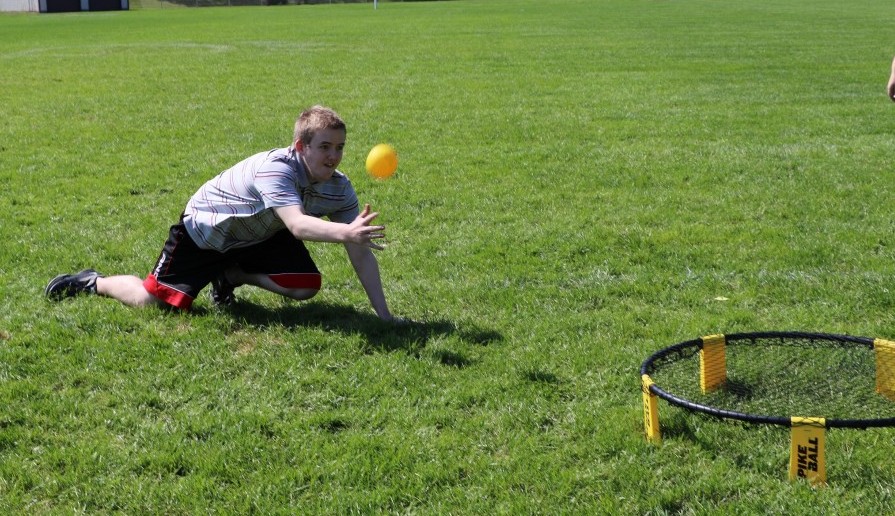 …a few basic concepts about the game:

2 teams play against each other

Some people learn better by reading and others learn from watching. Here is a video to watch about how Spikeball is played.

This game allows for movement, agility and skill that most people will need to acquire. As you try it for the first time, don’t be frustrated if you need improvement. Find three other people who like to “get into” their games, and have a blast playing it.

If you play and still have any questions, feel free to contact me through the comments area below. I will try to respond within 24 hours.

Stay active and have fun.