How to Make Yard Dice: So Your Family Can Play All Those Yard Dice Games That are Becoming So Popular.

Dice games go way back, but the new thing is to take those games outside and enjoy them while out in nature.  Here you will see how to make yard dice and then be able to go play the Yahtzee/Yardzee, Farkle, Dice Darts, and for young children you can use them to work on adding, or to play Beat That, or Going to Boston.  I will include directions and resources to explain the games mentioned here.

This is a great family activity, easy gift idea and fairly inexpensive way to get yourself a set of yard dice that you can use repeatedly for a variety of yard dice games.  I want to share with you how to make yard dice.

Why I wanted to make the yard dice.

I bought a cedar 4 x 4 post, and since I want to make and give them as gifts, I bought an eight foot piece of wood.  This gave me enough for four sets of six yard dice. Some games may not need six dice, but I figured it would be best to include six in the set so they could still play those games that need up to six.

If you have the equipment, they are easy to make and for the cost of about $7 you can have a set of your own or have Christmas gifts to be enjoyed for years to come.

What you will need to make one set of yard dice:

Rag to put stain on

How I went about making them

I bought an 8’ foot piece of cedar 4 x 4 and cut it into pieces of 3.5”  I purchased that much because I was making them for Christmas gifts. When I bought the cedar at Home Depot they cut it into two four foot pieces so that I could transport it home easier.

Using a chop saw, we cut them into 3.5 x 3.5 chunks, after making a block that was precisely measured out, it allowed us to cut each block exactly the same.  What I mean by a block was to pin a piece of wood to push the 4 x 4 up to before dropping the chop saw, so that each block was cut the same size. 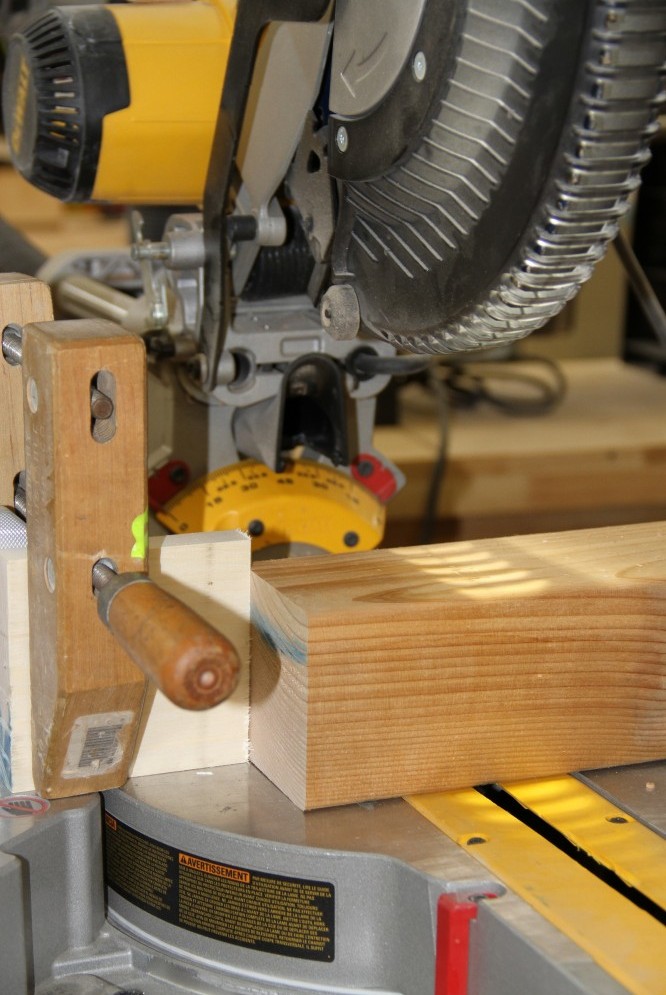 After all the blocks were cut, we then used the router on the edges to give them a gentle rounding, very similar to how the edges were on the cedar when I bought it.  Be sure to use a sharp blade on the router or it may cause splintering on the dice. That happened to me and so for some of the dice I tried to put wood putty on the larger splinters, but the only problem with that is when I stained the dice, the wood putty spots showed throw. 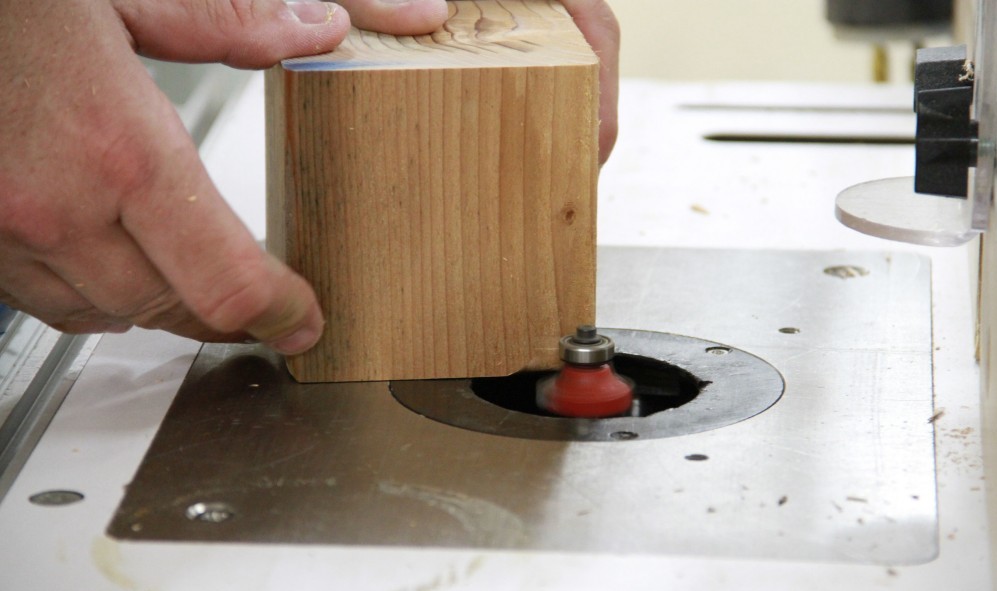 The next step was to sand the sides, edges and any rough spots.  This was the most time consuming part of the process. Since younger kids will be using them, I wanted to make sure that they were not going to get splinters.  I did it by hand instead of using a palm sander or any other sander. 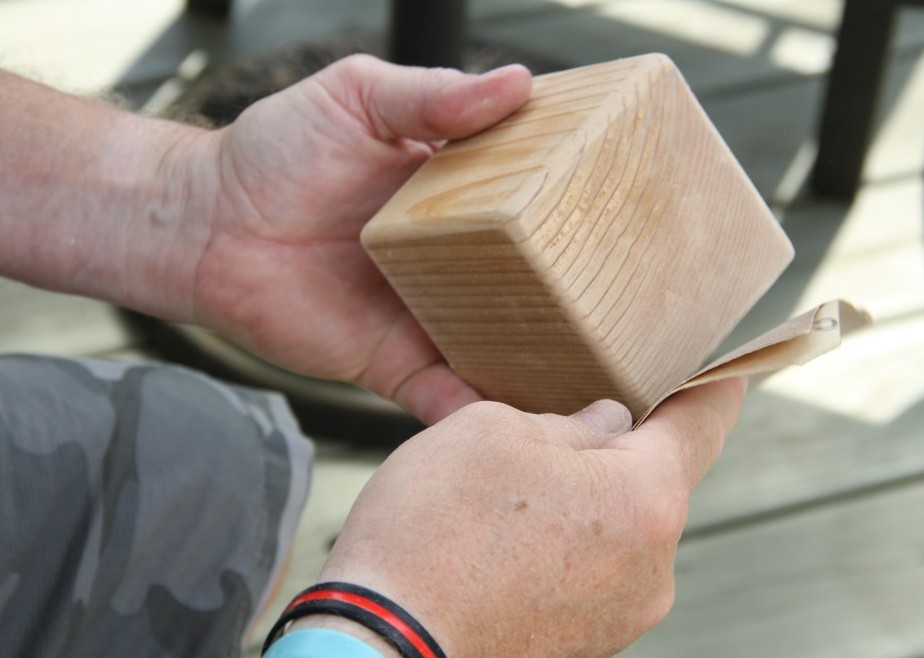 I was torn about leaving them in their natural wood color, staining them or painting them.  So, I decided to make some that were left natural and some that were stained. I used Fruitwood for the color of stain and I like the end result.

Alternative ways from what I already mentioned

Over the two times that these yard dice were made, we have made 16 sets of 6 dice and some were made with cedar and most were made with pine.  So in the top part of this post we used a chop saw and the second time I made these dice we used a table saw to cut the wood blocks.  Remember that if you don’t have a 12″ blade, you may need to cut the block a second time after rotating it, to get through the complete cut.  We had to turn the 4 x 4 after cutting once and then cut it from the other direction to get the cut all the way through the block. 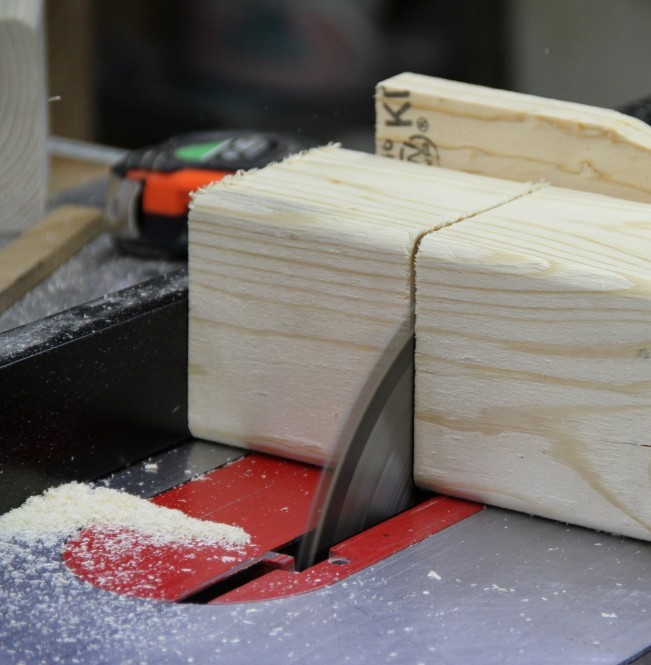 We then sanded all sides and edges of the wood blocks with a belt sander, which was really slick.  It definately made the wood smoother and was done quickly. 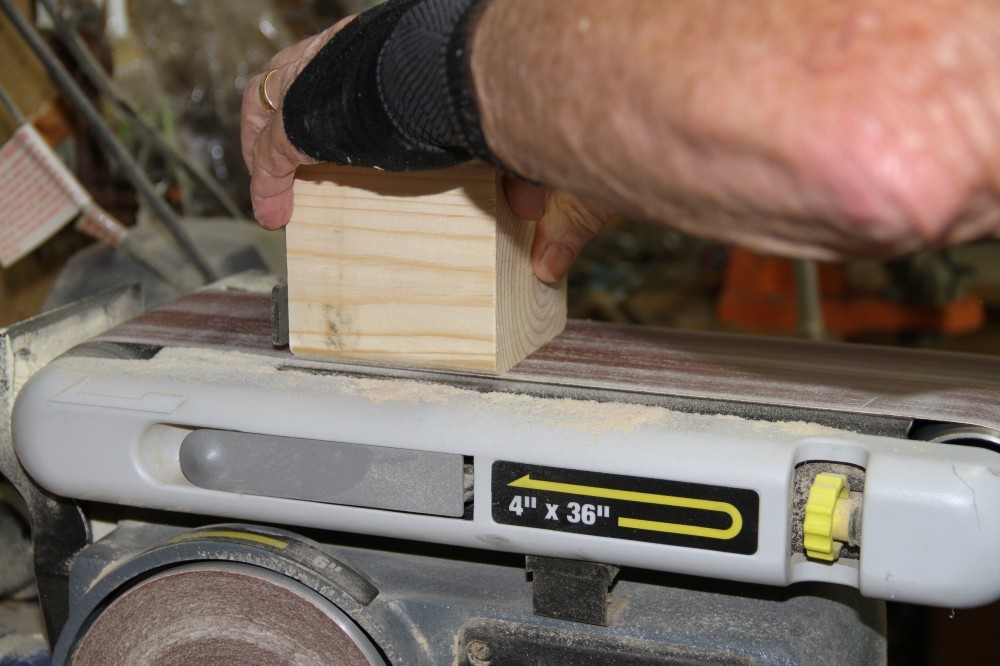 For rounding the edges we used a hand held router with a sharp blade and the wood blocks turned into perfectly rounded, smooth yard dice blocks.  If we do it again, we will router the corners and then sand the side with the belt sander.  The sanding by hand was very minimal compared to when I made the cedar dice. 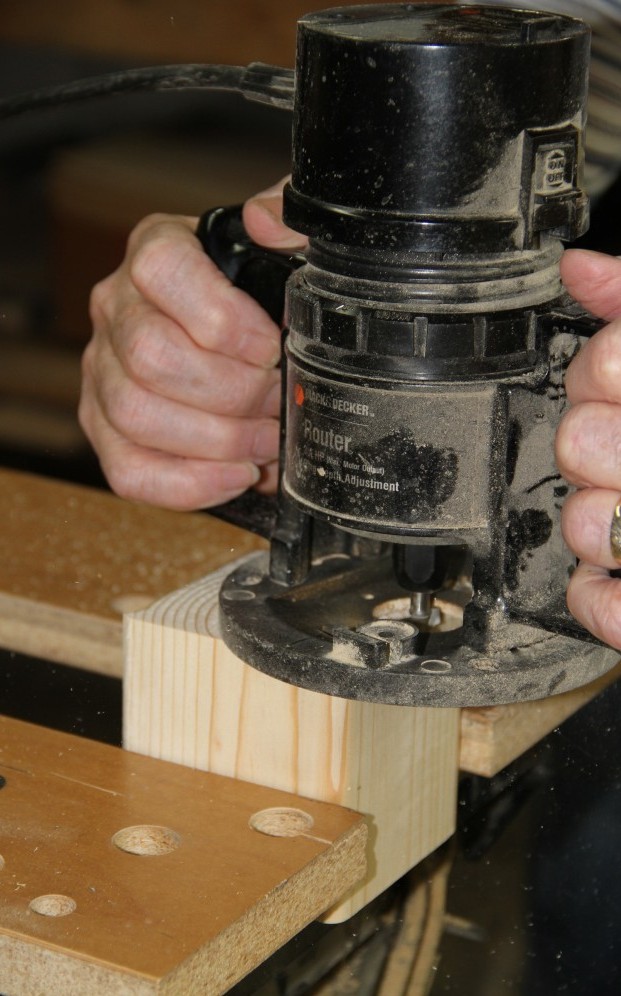 Where the top process was done in a large school shop classroom, the one just mentioned was in the basement of my parents house, and I felt the second sets turned out better than the first attempt.

I stained the first four sets that I made and white washed some of the sets from the second group.  To do this, I took exterior white house paint and watered it down at a 1:4 ratio.  With the first set I put dots on by using permanent outdoor vinyl and the second set we used black house paint. 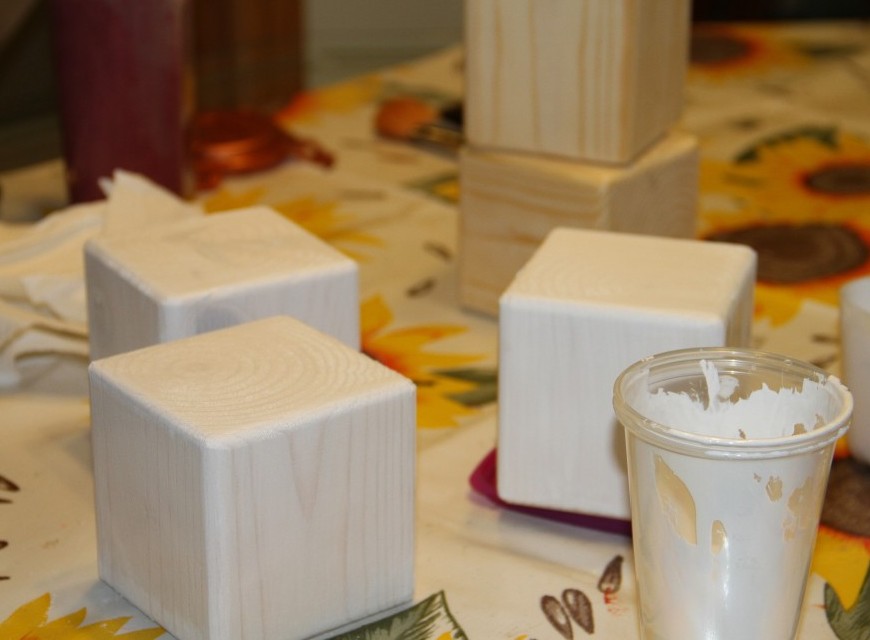 I own a Silhouette Cameo which enabled me to cut all 504 dots out of vinyl within minutes.  That is 126 dots per set of six dice and I made four sets. So that’s a lot of dots. Some people will use a punch to cut out the dots, but this was so much easier.  Before I cut the dots, I cut a 3.5 template that I had purchased from the Silhouette Store. These templates were for all the numbers of the dice and it shows where to place the dots. 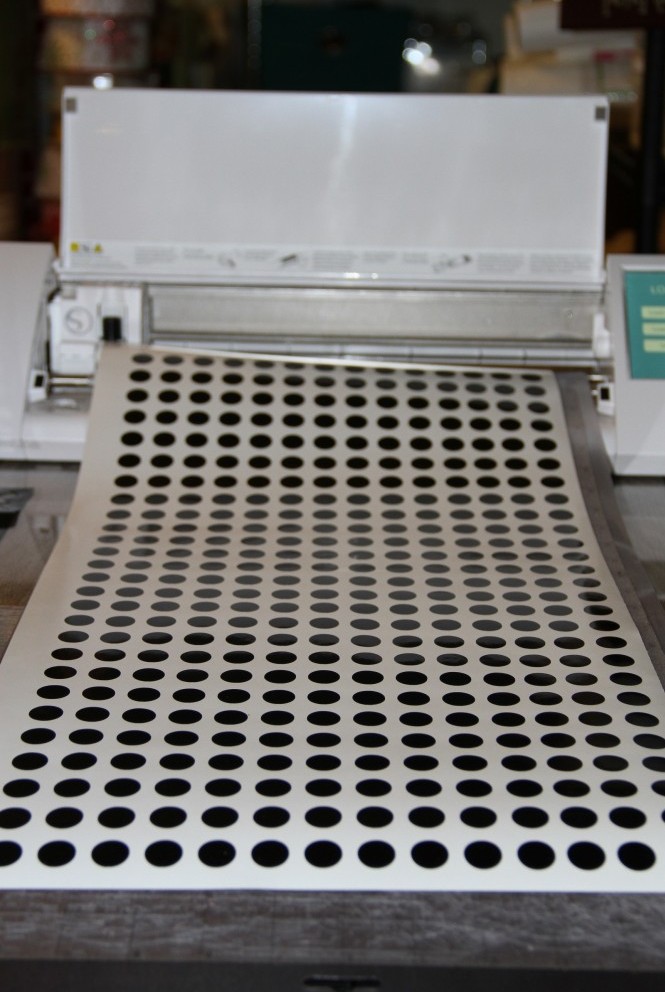 The vinyl is adhesive backed so I just peeled the dots and stuck them on by the guide of the templates, after they were all on I decided to varnish over them to be sure they stayed on even though I used outdoor permanent vinyl that I purchased from the Expressions Vinyl website.  With some of the sets, I sprayed them with polyurethane instead of varnishing them.

I searched all over looking for the right bucket to put them in.  I wanted something that adults and kids can handle when preparing to shake the dice and roll them out.  Something that was large enough and had a handle, plus one solid color so I could cut the vinyl and put it on the outside of the buckets. A 10 quart bucket is about the right size, and I found some online at the Lowes website.  I also picked a few up of the dollar store that would work well also. 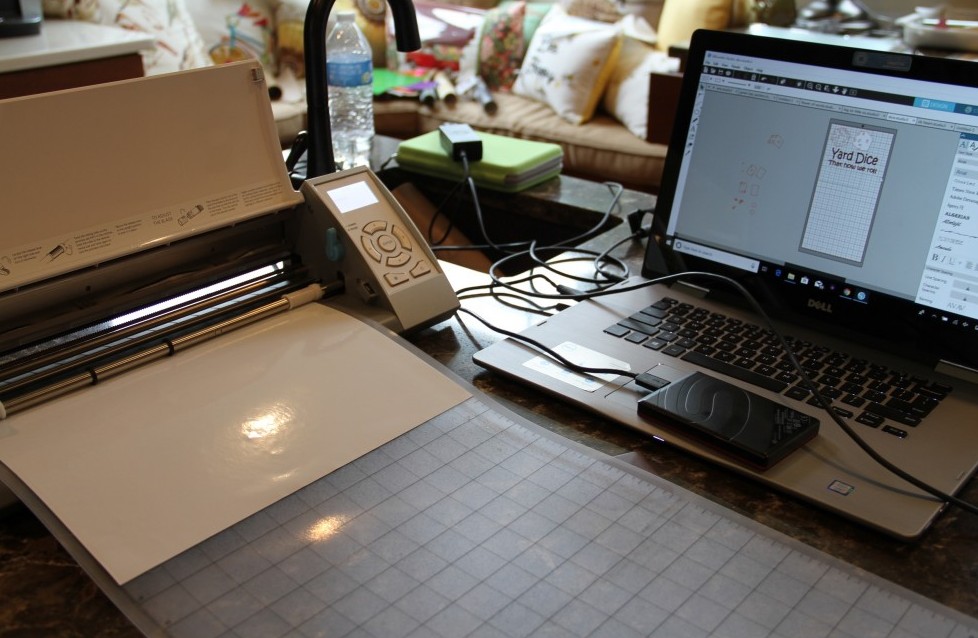 After I had the buckets, I cut a dice image from my Silhouette library and also created the saying for the bucket, then adhered it, and “WaLa”  it was complete and ready to put away for Christmas. However, I couldn’t help but keep one set of yard dice out so I could use them with friends and family members.

I happened to find a copy of Yard Yahtzee cards and after printing them I laminated them and gave them with the bucket of dice.  I also included a game sheet for Yarkle.

So how do you play the games mentioned up above?

What if I am not handy with tools?

If you do not have the tools needed, the patience to do this or the person to help, you do have the option of purchasing a set of yard dice and being able to play the games outside as mentioned.

Stay active and have fun!

2 Thoughts to “How to Make Yard Dice: So Your Family Can Play All Those Yard Dice Games That are Becoming So Popular.”